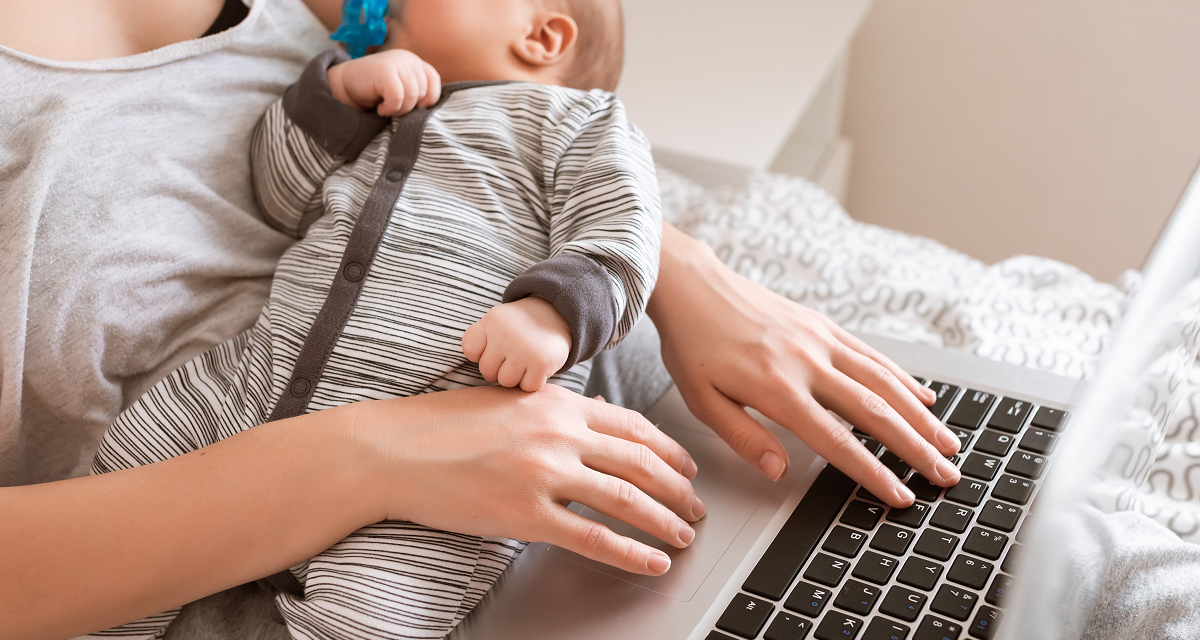 As I sit down at my desk this morning, I feel like a superhero. Although sleepy and covered in spit-up, I feel capable of anything, reviewing my upcoming deadlines as I simultaneously breastfeed my eight-week-old son. I am nervous to dive back into work after being gone on maternity leave, but the support I’ve been shown throughout my journey into motherhood has consistently proven that I have nothing to fear.

I currently work as staff writer and marketing manager for Grace Advertising and Consulting, Inc. as well as program director for our new nonprofit arm, Altruism Media, Inc. When I first met President and CEO Tonia Wright before my hiring in fall of 2020, she made it clear that as both a mother and female entrepreneur herself, she encourages employees to pursue all paths that interest them – including parenthood. At the time, I wasn’t planning on having children and didn’t expect that to change anytime soon. Still, as it is my dream position and one I expect to hold for quite some time, I felt comfort in knowing I could change my mind in the future without having to sacrifice my job.

When I found out I was pregnant in January 2022, I very thoughtfully weighed my options. It was important to me that my decision was not only emotional but practical as well, and that I was fully prepared to take on another life and the responsibilities (and costs) that come with. One of the greatest considerations for me was whether I’d be able to keep my job and stay on top of bills, as well as new costs, without my finances taking a hit. I did not want to be forced to walk away from a career I had spent my life building up to, and I needed to be able to afford to raise and care for my child. Although I have a loving and supportive partner, I wanted to make sure that even in the worst case scenario, if things didn’t work out between us, I would still be able to care for the life I would bring into the world.

Because Wright had been so vocal about her support for working mothers from the very beginning, I immediately reached out, confiding in her before I did my own parents. Before I made any decisions I wanted to know what work would look like and how that would potentially impact my journey. To my relief, she welcomed the news with overflowing joy and support, making it undeniably clear that her promise still stood. She provided me with 12 weeks of paid maternity leave, a gracious offer that secured my decision to pursue motherhood. Although I was nervous, I was also confident that I would be taken care of throughout the upcoming hurdles of pregnancy and parenthood and that I could be transparent about any concerns or struggles I faced along the way.

With a due date of August 25, my leave was set to begin July 31. Because I felt comfortable telling Wright about my pregnancy as early as January, we had plenty of time to plan for my departure as well as ensure the team would be prepared. We were able to spend the next few months getting ahead of schedule, knocking out projects that would be due while I was gone as well as training the team for a seamless transition.

Another major benefit I was granted was the freedom to take appointments as needed; I was consistently reassured that mine and the baby’s health were a priority. Because my workload was being lightened in preparation for my leave, and because Wright was aware of my situation, I was able to notify her of any physical and mental health appointments in advance and attend them without using PTO or vacation time. As someone who has struggled previously with employers who refused time off even for emergencies, this change was welcome. Rather than being filled with dread and anxiety that resulted in me putting off or avoiding caring for myself altogether, I was able to comfortably communicate my needs, knowing they would be met without punishment or judgment.

At the first sign of concern or discomfort, I was able to take the time I needed to see my midwife or schedule a therapy appointment. As a result, I endured a miraculously stress- and complication-free pregnancy. While other expecting mothers I knew were working long shifts on their feet right up until labor, I eagerly awaited a two-week transition period between the start of my leave and my due date. The early start to my 12 paid weeks allowed myself and my partner the time we needed to prepare the house for our baby, excitedly nesting, setting up insurance paperwork, and wrapping up any loose ends that would be too much to handle once he arrived.

Preparing the entire team well before my leave also provided another benefit: because so much time and care went into ensuring everyone had what they needed to take over my workload, I was able to enjoy my maternity leave without being brought back into work. I would have been happy to answer questions or send a quick email here and there if needed, but I was thrilled to be able to sit back and relax (as much as possible) and take in my new routine without interruption or worry that someone was waiting on something from me.

I was also able to relax because I knew exactly what to expect when my 12 weeks came to an end. Having worked mostly from home before pregnancy, with the exception of important meetings or team brainstorm days in the office, I knew I would have the same flexibility when I returned. Wright and I kept in touch throughout my leave, not to discuss work, but to celebrate my accomplishments as a mother so far as well as remind me that my return – should I still want it – would be built around what I needed to succeed.

Coincidentally, many of my friends and peers became pregnant around the same time as me, and I spent much of my pregnancy and maternity leave watching other women navigate similar paths and challenges. However, no one else received the same benefits I did. I frequently heard them stressing about the loss of pay and lack of bonding time, dreading sending their newborns to daycare so soon and missing out on major moments, and speaking up about how unpaid parental leave – always shorter than 12 weeks and usually by far – was a huge blow to their family’s financial situation and contributed to extra and unwanted chaos.

I wholeheartedly believe I would not have been able to make the decision to start a family had I not known I would have the support of my team and the extent of benefits provided to me. Each time my son hits a new milestone – whether it be his first social smile with sight of his dimples, the first coos showing signs of an early “hello”, or his first time catching a glimpse of himself in the mirror – I become sick to my stomach thinking of a stranger in a daycare center being the first to catch it and relay the news to me. With rising costs of daycare, rising rates of illness spreading among children throughout the COVID-19 pandemic, and a ramped up RSV and flu season, I am equally sick to my stomach thinking of the cost and possible consequences of leaving him in another’s care.

My first day back to work was admittedly a challenge. With the last three months to practice, I had gotten into a fairly consistent routine of feeding my baby around 7 a.m. and getting him down for a nap by 9 a.m. I was certain I’d be bright-eyed and bushy-tailed well in time for work and almost didn’t set an alarm. Of course, that was the first time in weeks I spent most of the night awake – rocking, feeding, soothing – until my 8:30 a.m. alarm ripped me from REM sleep and bolted me into a groggy morning back on the job.

However, being able to cradle my beautiful boy in one arm and click through welcome back emails with the other brought a renewed sense of strength, capability, and identity. Becoming a mother, though beautiful and empowering on a spiritual level, undeniably made me lose sight of my individual sense of self. Though I had gained a new side of myself, one focused on family and my role as a provider and partner, I had noticeably lost the woman I had been previously. But being in a position that supported both halves of me simultaneously, without fear that one would eventually be forced to succumb to the other, restored the whole of me in an entirely new light.

For me, one of the most difficult challenges of becoming a mother was doing so without the support of my own. I lost my mom to lung cancer in April after learning of her diagnosis roughly a year and a half prior. Though she was able to celebrate the early months of pregnancy with me, and imparted her wisdom and love on me long before that, the hole her death left was devastating and all-encompassing. I consider myself a resilient and fairly unbreakable person, but navigating the challenges and anxieties of this journey without her nearly destroyed me.

My saving grace was and continues to be the support I received elsewhere. Along with that of my family and friends, the grace I was shown by Wright and the rest of the team made motherhood possible for me. Regardless of struggles I may face figuring out working from home with an infant on my lap, I know I will be taken care of. I am motivated to do the best I can and conquer my new path as a working mother, and I am comfortable asking for help when something isn’t working.

My wish is for other expectant parents to be shown the same grace. It is shameful for a country that prides itself on greatness to come up short in its treatment of new parents, falling behind 32 countries offering some form of paid parental leave. If we value our workforce as much as we seemingly do, we can certainly afford to value the individuals creating and sustaining it. In addition to my personal anecdote, a 2020 report shows that offering paid maternity, paternity, and adoption leave yields strategic benefits including employee health and wellness, employee engagement, employee retention, and the ability to attract talent.

As a new mother, and a working one at that, I am also more informed of the struggles faced by those in my community, especially those of whom I serve. Through Altruism Media, Inc., we offer a program called the Maternal and Infant Health (MaIH) Project which works to provide birthing people a whole-person continuum of health and social care, support, and resources. Witnessing firsthand the gap between my experience and that of the new and expectant parents in my community, especially Black and Hispanic women, allows me to better understand the changes that need to be made. To learn more about the MaIH Project or to receive support, visit https://altruism-media.org/the-maih-project/ or call or text 844.860.0111. 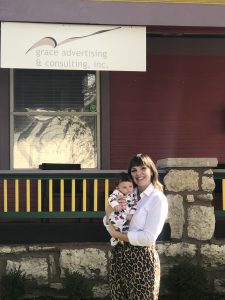 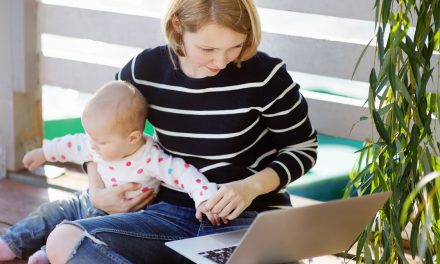 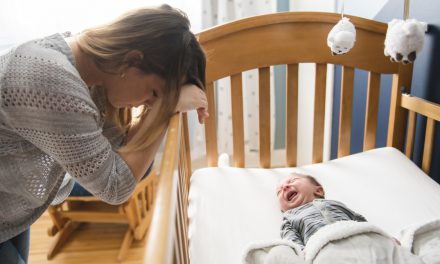 Calling Suicide by its Name May Save New Mothers 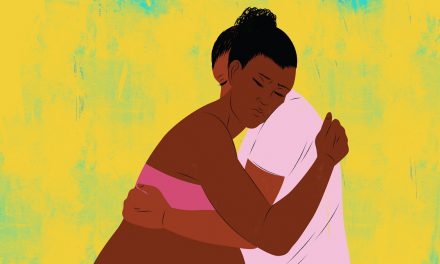 The Value Doulas Bring to New and Expectant Parents 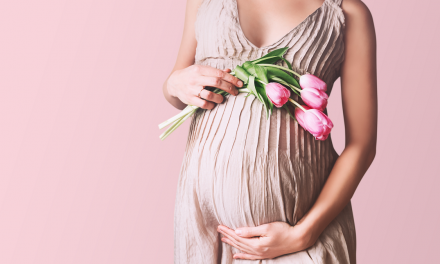